With funding from the Mozilla Foundation and IBM, in 2008 the ATRC continued to help communities add support for accessible DHTML using ARIA. This meant a whole whack of little things, including frequent emails and chats, and some other things, like code commits, testing infrastructure work, document editing, and committee work.

My primary role was to help make sure Web2.0 communities knew about ARIA, and to help them with any implementation work through what amounted to a mutual-mentorship. I'll discuss deliverables related to this evangelism-ish goal first, and then move on to some more specific community work. Then come back at the end with some brief thoughts on the evangelism aspect.
Initially and iteratively I worked with Aaron Leventhal on strategic ways to spread awareness of ARIA. At some point we realized developers needed a place to go for sample code, and hey, code talks, baby.

We started to see additional people and communities providing great resources about ARIA. As specification and best practices work continued in the W3C, we realized it would be nice to provide a central hub for all the ARIA activity and evangelism that was happening "in the wild". Together this community created a 'vendor neutral' wiki: wiki.codetalks.org, as well as an svn code repository, and bug database. These sites are hosted by the ATRC, and we plan to continue hosting them as long as they are useful. Aaron created a free-aria google group for, not surprisingly, the free discussion of ARIA. Oh, by the way, any readers good with logo design?

Given my prior work on Dojo Toolkit Accessibility, and my colleague Joseph Scheuhammer's work on the Fluid Project, we were invited to join the ARIA specification efforts as 'invited experts'. Our input to the discussions came primarily from actually trying things out, and our work on Dojo and jQuery.

The ATRC continues to attend and contribute to the DHTML Style Guide meetings which address keyboard bindings for DHTML widgets.

A core contributor is leading the ARIA effort here, and I feel it is in good hands, with a decent community effort; so in a sense, "job done!" The community has not finished of course, but we've got a pretty clear roadmap ahead, and we've made some good progress. As a major redesign (in UI) moves forward so does the opportunity for further ARIA support. We've added the core ARIA support and it takes about a day or two to add ARIA support, with automated tests, to a jQuery UI 'plugin' (think 'widget' or 'component'). Adding polished keyboard interaction can take longer. The ATRC's Fluid Project team, having already worked through a lot of keyboard and navigation issues on top of jQuery, is now moving this know-how upstream and working with the jQuery UI community.

We continued to work with the Dojo community on dijit, the mature and accessible widget set, with a focus toward helping sustainability. Joseph was our main resource for this work and initially focussed on grid widget keyboard accessibility (non-trivial) and spent a fair amount of time doing QA, including manual tests. Later he created automated UI tests using a robot currently found in Dojo's test harness: D.O.H. and has worked to move ARIA smarts into Dojo core.
ARIA Evangelism

One thing I've struggled with in the evangelism part of our grant is knowing when we are successful, or even when we are finished. Other browsers and toolkits are adding ARIA support, but how much did the ATRC help make that happen? Did we use the right amount of pressure? Did we help enough? I think we'll never know.

One thing I do know is that the Mozilla Foundation likes to seed activities that fit its wonderful manifesto/mission. I can say that in this respect the Foundation has been very successful here, and that the ATRC continues to pursue and win funding that will allow us to continue to focus efforts on open web accessibility now and into the future.
Finally, all this experience is helping me in my current gecko work!
Posted by David Bolter at 9:15 AM 6 comments:

We're on our way! Thanks to funding from the Mozilla Foundation, Eitan Isaacson has built a tool for comparing browser accessibility implementations. His latest post titled "Apples and Pairs" provides some examples of its usage.

Thank you Eitan!
Posted by David Bolter at 9:47 AM 4 comments:

What should the alt text be? I think I give up... 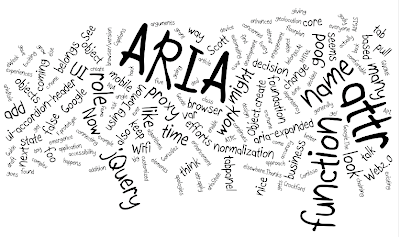