Despite agreement that it would be great if web developers could have a consistent standard way of supporting WAI-ARIA, it looks like syntactically (at least) is out. Browser ARIA implementation (how events, semantics, and structure are exposed to platform API) consistency is yet to be determined. Thankfully there is a harmonization effort built around a shared wiki document: ARIA User Agent Implementors Guide. Please for the sake of all things good...

Aside: Currently "IE8 Standards Mode" is expected to be the "default mode", unless you add a meta tag: <meta http-equiv="X-UA-Compatible" content="IE=EmulateIE7" /> or have a doctype that triggers quirks mode. What if you are building a DHTML widget library? What mode are you going to be in? What about mashups? More normalization... sigh... Does it always have to be this way?

Thanks for reading.
Posted by David Bolter at 10:18 AM 5 comments:

Several days ago Tim Riley, and Jono DiCarlo, both from MoCo visited our lab here at the ATRC. As a sort of swearing-in I took them to our services pod where they got to try out some assistive technology. I took a few pics, and decided to try out my free download of Comic Life for OS X. It is a visual tool that is incredibly intuitive and simple to use (but not very accessible I'm afraid). 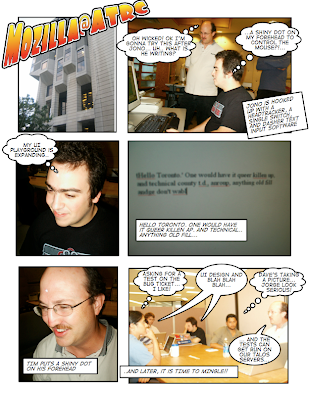 The first few frames show Jono, and Tim with shiny dots on their foreheads. These dots are picked up by a camera resting on the top of the screen, and allow the operation of the mouse pointer via head movement. We hooked them up with the open source Dasher input software. I think they both got a kick out of trying this and other Assistive Technology. The last frame shows them meeting with more of my group at the University of Toronto, where we discussed QA, automated testing, and UI design in open source communities.

Thanks for reading.
Posted by David Bolter at 2:17 PM 2 comments:

On Monday and Tuesday I attended the Mozilla DevDays Toronto event. This blog isn't so much about the content (which was video taped for later posting) as it is about the essence of my reaction to the event.

In a nutshell, Mozilla DevDays Toronto was extremely valuable to me. All the talks I attended were good, but as is so often the case, I found a lot of value in hallway conversations and breakout meetings. Asking key Mozilla people my half-baked questions in person miraculously ended in fully baked answers, with icing and sprinkles. I'm thinking half-baked questions have to be delivered in person. Mark Finkle thanks for the tips and demystifications about distinguishing XUL dom events, and about XPCOM wrapper decisions.

Day two's talks on automated testing were an awesome introduction to xpcshell, mochitests, chrome tests, asynchronous tests, and ref tests in Mozilla. Note there is an extension developer addon that has an xpcom-ready JavaScript shell (or you can use xpcshell from the command line if you build Firefox yourself).

It was great to see timr again, and to meet jono, mfinkle and others; faces to names as they say. (Tim and Jono ended up touring my workplace today, where we showed them Assistive Technology and chatted about Ux design, automated testing and QA. I'll post on that when I upload my pics off the camera.)

Let's not forget humph! Thanks Dave, I know these events take a lot of effort to pull off, and I want you to know that (at least from from my angle) you put on a high value event!

On a recent thread over on wai-xtech, T.V. Raman brought up the notion of talking about capabilities instead of disabilities. I like this. I'm reminded of my old post which played with the definition of disability.

Furthermore, a request for adaptation should never have to be a statement about the physical individual. It should be a statement about a preference in context. I want captions when watching television with the volume down, and I want a ramp when pushing a stroller.
Posted by David Bolter at 9:34 PM 5 comments:

Alex Rudnick from the Google Web Toolkit Team has recently posted on the topic of ARIA and GWT 1.5. Specifically he states

To make applications built with GWT more easily accessible, we've added accessibility support to the GWT library by baking ARIA roles and states into our widgets

Great stuff. Not everything in the youthful ARIA ecosystem of browsers, desktop, and assistive technology is fully working; but we'll get there if we all work together.

Thanks for reading.
Posted by David Bolter at 2:30 PM 1 comment:

Aaron Leventhal has created a Google group: free-aria (reminder: ARIA is the technology for an accessible Web2.0). This is a great place for working discussions. Please read Aaron's related blog.

We really need people willing to help build and organize our test cases, as well as people with the skills to do the testing.

If you want to help but aren't sure how, feel free to email me.

Thanks for reading.
Posted by David Bolter at 10:01 AM 1 comment:

Jonas Klink from Google will join the WAI-ARIA browser harmonization effort! This small and lean group, spearheaded by Aaron Leventhal currently meets weekly to discuss the details of how user agents should expose WAI-ARIA semantics and events to the desktop platform accessibility layer. We have representation from Firefox, Safari/WebKit, Chrome/WebKit, IE, and Opera; as well as some representation from JavaScript toolkit ARIA development (me).

The current work is focused on contributions to the ARIA User Agent Implementors Guide created by Aaron. This document captures practical implementation details based on the experiences of the Firefox accessibility developers in pioneering browser ARIA support.

Thanks for reading.
Posted by David Bolter at 10:08 PM 1 comment:

"Blog feeds from the contributors of accessibility through technology."
http://www.planet-a11y.net/

Thanks Bryen Yunashko (suseROCKS), and Flavio Percoco Premoli (FlaPer87), for this fine contribution to our growing community!
Posted by David Bolter at 10:23 AM 2 comments:

It seems Google has an open source browser project.

Is Chrome accessible? Although there was a lot of information about V8, the JavaScript VM, the comic didn't tell me if it had WAI-ARIA support for JavaScript+DOM+CSS based web applications. I was really hoping to see a T.V. Raman, or Charles Chen comic character.

Seriously though, it sounds like the rendering is to be done by Webkit, so perhaps too, the exposure of ARIA semantics in the DOM to desktop Accessibility API will eventually come from Webkit. Of course Firefox has pioneered this stuff, but Aaron is helping the other browsers as much as he can. Today, ARIA is a crucial piece of pushing the web as an application platform.

Thanks for reading.
Posted by David Bolter at 10:02 PM 11 comments: